About the Author
Priya Ganapathy is a prominent media and entertainment personality with a career spanning print, radio, TV, film, internet and theatre. She is a widely published writer, who has contributed to books, articles and columns in leading newspapers and magazines. A popular radio jockey who created the iconic characters Lingo Leela and Sister Stella, Priya now works as an independent writer, anchor and voice-artiste. 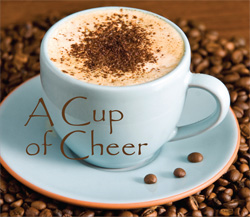 When Napoleon Bonaparte famously said “I would rather suffer with coffee than be senseless”, little did he know that halfway across the globe, there would be a legion of people who had already pledged their allegiance to the same dictum. If coffee is touted as an intelligent drink, India probably vindicates this fact with its fair share of intellectuals. The rest of the world may sip a different brew, but good coffee in India is defined by the typical South Indian Filter Coffee. Hot, strong, sweet and topped with bubbly froth, ‘filter kaapi’ as it is popularly known has been a way of life in India for centuries.

Cappuccino, its fashionable counterpart triggered the coffee bar revolution in India only in the 1990s. Before the proliferation of hip up-market coffee shops like Starbucks, Tim Hortons, Java City, Barista, Gloria Jeans or Café Coffee Day in Indian metros, it was the iconic India Coffee House and multitude of smaller cafes that catered to the caffeine fix of the great Indian populace, outside the comfort of home.

Even today, if you walk into any bylane at the break of dawn, the unmistakable aroma of filter coffee and the mellifluous voice of M.S. Subbulakshmi’s music drifts out of hotels and homes. And once you have had an invigorating cuppa, it is tough to go back to the bilge that is sometimes passed off as coffee. Prepared from a blend of chicory and dark brown roasted coffee beans (Arabica or Robusta) procured from the hilly slopes of the Western Ghats, filter coffee holds a huge chunk of the country’s coffee market.

So what makes South Indian Coffee so distinct? More importantly, how do you prepare the perfect cup of coffee?

The answer lies in what goes into a beautiful metal device called the Coffee Filter – fresh ground coffee beans mixed with a percentage of chicory, the common coffee additive that gives good body to the flavor with its dash of bitterness. The antique brass coffee filter itself is somewhat of an heirloom passed on from one generation to the next. Today, you have a whole range of designs and sizes to choose from while buying a coffee filter – from steel filters to modern swankier options. The daily ritual of making coffee is nothing short of an art that has to be honed to perfection.

Basically, all filters serve the same purpose – to make the perfect decoction. The traditional filter is a cylindrical metal column comprising two metal cups, placed one above the other. The base of the upper chamber is perforated and rests snugly in the other “tumbler” cup, with enough room underneath to collect the brewed coffee. The upper cup has 2 detachable parts – a pierced pressing disc with a stem handle in the center and a lid at the top.

Once the upper cup is loaded with fresh ground coffee (80%-90% mixed with chicory 10%-20%), the powder is gently pushed down with the stemmed disc to compress the grounds into a compact layer on the perforated section. Ideally, a medium to fine grind is used for making filter coffee. In a traditional coffee filter, approximately 2 heaped tablespoons of coffee ground can prepare a decoction that serves 6 medium sized cups. Water that has come to a boil is then poured over the stemmed disc and the upper cup is covered with the lid. The contents are left to stand. Since chicory helps to retain or hold water a little longer, it enables the water to extract and absorb more flavour from the ground coffee. This makes the South Indian brew a lot stronger than the Western version of drip-style coffee. Ideally, if the coffee brew is allowed to drip naturally, it will slowly collect in the lower container. It would take approximately 45 minutes for all the water to strain.

No matter what blend of coffee you like or which equipment you use, the goal of making coffee is the same – to release the coffee oils and soluble coffee compounds into the decoction for the final beverage. The optimum amount of mass to be extracted from the ground coffee is about 20% and proper brewing ensures that not too much tannin is released into the decoction. Elsewhere in the world, Drip Coffee or Filter coffee is prepared by allowing water to pass through the coffee powder by gravity alone and not under pressure of forced long-term contact with water.

Usually, about two to three tablespoons of the collected potent brew is enough to stir up a good cup of coffee in a tumbler or cup of hot milk. Sugar is then added to taste. Quite often, the trick is to avoid stirring the coffee and milk. Typically, piping hot milk is poured over the brew and the sweetener is added. This mixture is then blended together by deftly pouring it back and forth between a steel tumbler called “lotaa” and a lipped bowl called “dabarah”. This swift action of pouring the brew in streams of wide arcs, has a trifold role to play – firstly, it helps to cool down the coffee, secondly, it mixes all the ingredients evenly and thirdly, it works up a rich bubbly foam head above the coffee, without any dilution; much like the action of a steam wand used to make frothing cappuccino.

It was probably the skill of the person who stretched the distance between the tumbler and bowl to about a meter, while pouring the brew without spilling the contents which helped South Indian Filter Coffee earn another moniker – Meter Coffee. Another typical phrase in South India is “By-two coffee” which literally means “one coffee divided by two”. Clearly, the convenient division of drink could be attributed to the social role of coffee – where two individuals can enjoy a shared sense of bonhomie or perhaps, indicate a draining wallet.

The debate whether coffee should be listed among the Top 10 Feel Good drinks of the world or lauded as a creative and cerebral stimulant or reviled as a health hazard may rage on for decades… At the end of the day, the way you prefer your coffee is a matter of personal taste. By and large, a good cup of traditional South Indian filter coffee is made using Plantation A or Peaberry coffee bean varieties, with the former being considered slightly inferior. In the old days, most South Indian households preferred jaggery or honey to white sugar. In fact, the use of granulated sugar as a sweetener began in the mid-20th century. Today, brown sugar (not the drug) and sugar-free tablets are regarded as the healthier options. However, most European coffee connoisseurs and purists do not advocate the addition of milk, cream or sweetener to their coffee.

Finally, the appreciation of coffee has gone beyond the satisfying “mmmmm” or “aaaah” after the first sip. It has evolved from a personal habit in individual homes, to a social culture popularised by large chain café bars and outlets and more recently, to a global specialty coffee movement called the Third Wave Coffee. The humble brown beverage now relishes the same niche status as high brow forms of culinary appreciation like wine, tea, and chocolate. Not bad, for a little brown seed that suffered an identity crisis of being a fruit, a cherry, a berry and a bean in its lifetime. In the end, it’s just coffee.